Simple to use, portable chartplotting for your iPad is changing the way we navigate afloat. But does manufacturers’ hype match the reality? Matthew Sheahan and Elaine Bunting take seven iPad navigation apps afloat to find out. Once you’ve tried one it’s easy to see why iPads and other tablet computers are changing the way we work and play. Use one afloat with one of the better iPad navigation apps and you may well wonder whether your dedicated chartplotter is necessary any more. You may also question why your built-in plotter system and charts cost so much when you can apparently do the same thing with a tablet device and a quick download.

But beware. While the tablet revolution is a genuine breakthrough and provides some simple and effective ways to navigate, it is not without its problems. There’s a wide variation in software packages, both in cost and ease of use. Some packages are superb value for money and easy to use. Others leave you gnashing your teeth.

READ THE REVIEWS OF THE SEVEN iPad NAVIGATION APPS TESTED

As the manufacturers are keen to stress, it is important to remember that no matter how good a chartplotting app appears to be, you should not use this as your primary means of navigation. Nevertheless, tablet-based systems are having a big impact on sailing and can be a handy aid to navigation, especially if you are moving from boat to boat – chartering, for example. 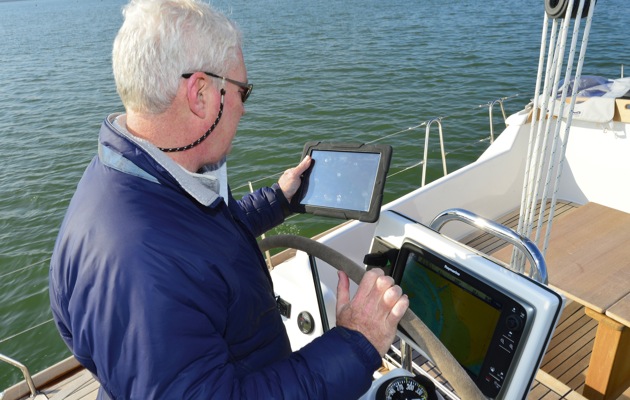 So, we decided it was time to see how the apps compared. Our test focused solely on those for the iPad and was limited to standalone chartplotting apps; in other words, programs that run on your iPad without having to be connected to anything else.

To do this we used a 3G iPad2 and used its internal position-fixing system. It’s important to note that wi-fi-only iPads do not have a GPS fitted, so can only base their position on triangulation from phone antennas. This is usually not as accurate as GPS when you are out and about afloat and of no help once you are out of cellular range, which for triangulation purposes may not be far from shore.

Our test was conducted in Poole aboard a Nordship 430 DS. This picturesque harbour and the channel approaches outside provided plenty of targets, twisting routes and a variety of tidal flows to test the various systems.

The market for worldwide chartplotting apps on the iPad alone is growing by the month. Factor in the development of similar systems for other tablet systems and the handheld chartplotting scene is booming. But after a careful look at the market for iPad systems, we selected seven of the most popular systems used in Europe.

Instead of focusing on a detailed comparison of the various functions, our test sought to establish how easy and practical the systems were when in the real world: on board, at sea and under way.

See what Elaine Bunting had to say in her blog

Our guide to features to look for in iPad navigation apps

When it comes to choosing the best system for the kind of sailing you do, price is not always the best guide. Comparing a detailed list of functions is not always easy either. During the course of our test we drew up a list of some of the key features that we at Yachting World think are worth looking at when you’re weighing up the options.

The ability to zoom in and out without having to look for and load different charts and/or folios is an important basic function.

Waiting for a chart to load is frustrating and there is a surprisingly big difference between manufacturers in the time it takes to refresh a chart after you’ve zoomed in or out.

Chart coverage varies widely across cartographers and systems. While global coverage may not matter to you, consider the areas that you need and the type of charts you prefer and you will have whittled down the list.

How easy is it to find and download charts for the areas that you need? Some graphical-based systems such as Garmin and Navionics make the selection very straightforward; others assume you know the names of the charts you want.

• Ease of making a route

In our opinion, this is fundamental to the use of a chartplotter. Can you simply use your finger to tap positions on the chart where you want waypoints or do you have to run through a number of menus? In our opinion, selecting waypoints from a list is cumbersome and old-fashioned.

The chances of tapping the screen in the right place first time for each waypoint is highly unlikely, especially if you are threading your way through an archipelago. Typically, you’ll want to zoom in and adjust the precise positions. Not all the systems make this easy.

Measuring distances, not just from the boat, is clearly a key part of any navigation system. Check how easy this is.

A picture is one thing, but sometimes the easiest way to tell your crew where to steer next is to call out course and distance to the waypoint. Once again, not every system has this.

If you are looking to plan your route on an iPad, but navigate using the yacht’s system, the ability to export routes is important.

At their most basic level, most chartplotters use the tidal diamond information from the chart. The better systems will show flow arrows overlaid onto the chart.

Knowing where you’ve been helps significantly when visualising where you’re going. Track recording is also a useful supplement to a log.

Most systems require the addition of another module to overlay weather arrows onto the chart, but not all. Again, a very useful feature to have.

We were surprised at how few systems have this feature. While you can usually move a cursor over your boat icon to get the ship’s lat and long, this is not as convenient or as accurate as having a constant readout of the boat’s position.

While the test didn’t seek to assess how well chartplotters would link to the boat’s instrument system, this may be of interest to you in the longer term, so it might be worth considering when you choose a chartplotter.

We were very surprised that none of the systems we tested had a man overboard button.

Get started learning about traditional and electronic navigation with one of the following courses:

This is a completely online introductory course about navigation and seamanship.

This is a more advanced and in-depth navigation course. It can be completed in our classroom at Mooloolaba, or online at your own pace.

How Are Nautical Charts Corrected On Board Ships?

Sunshine Sailing Australia's sailing school is recognised as one of Australia’s leading sail training and experience providers. With sailing lessons taught in the class room and on the waters around Mooloolaba, the Whitsundays, Lord Howe Island and Brisbane.